Whatever food rocks your boat, it’s getting much easier to find delicious vegan options when eating out. From juicy jackfruit to spectacular salads, there’s something for everyone.

In May 2016, the Vegan Society reported that Britain’s vegan population had increased from 150,000 to 542,000. All in the space of a decade! (Alongside a vegetarian population of 1.14 million.) It’s likely that if the poll was done again today, the number of vegans would be even larger.

Going vegan has gone mainstream. It’s now easy to eat as a vegan wherever your friends and family fancy, even if they don’t share your lifestyle choice.

But it’s still a big treat to go somewhere and have the whole menu to choose from. That’s why it’s exciting that so many vegan markets are popping up across London and the rest of the country. It’s a great way to bring the best vegan traders together in one place for everyone to discover and enjoy.

One vegan market on the rise is based in Brixton. The market, which is open on Sundays, is part of the group, Brixton Station Road Community Markets. 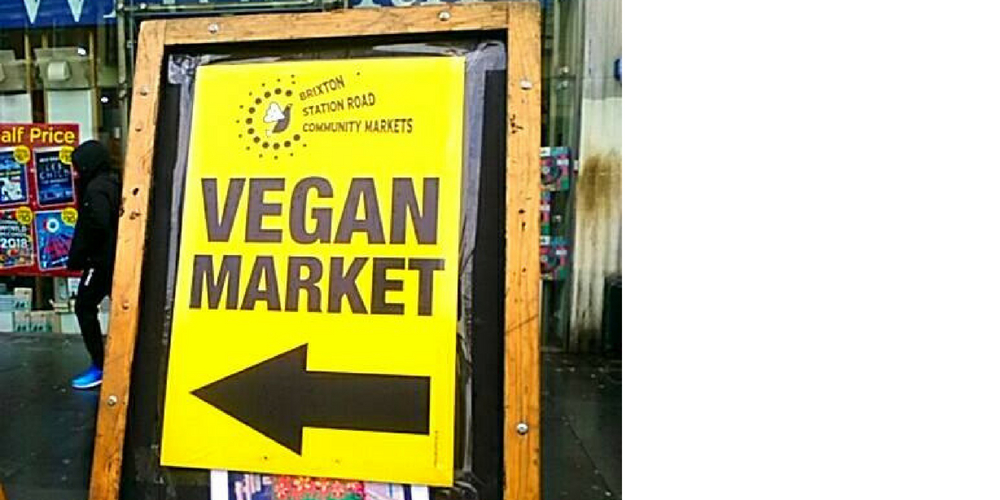 Since opening, hungry visitor numbers have risen and now most stalls have sold out by the end of the day. There’s space for 12 vendors (although apparently one snowy Sunday in mid-December saw only one hardy stall holder turn up!) The market has big growth plans and there will be lots of tasty additions over the coming months.

A unique feature of Brixton Vegan Market is that you probably haven’t heard of the traders. Unless you’re a regular of course!

At many of the more established vegan markets, you can normally expect to see some well known names. Popular vegan pop ups include Temple of Seitan and Biffs Jack Shack. But that’s not the case in Brixton. This makes the whole experience more interesting, as there’s plenty of new and exciting things to try.

The lineup of traders changes frequently but there are some regulars. Las Vegans offer plant-based burgers, lentil meatballs, chocolate brownies and more. Another is Twinz Kitchen, bringing you stews, mac ‘n’ cheese and other goodies.

You’ll also find art workshops and portrait sketching. Ideal if you fancy a fun activity while you’re munching on your tasty and ethical treats!

Head down to the the market at Brixton Station Road every Sunday between 11am and 4pm. Enjoy the fabulous food on offer and help support great vegan businesses at the same time.