There’s a warehouse in an industrial area of East London near the historic Royal Docklands that goes by the name of Unit 84. This is where you’ll find the brainchild of Tom Webster (COO) and Kate Hofman (CEO), founders of GrowUp Urban Farms. GrowUp is the UK’s first commercial scale aquaponic farm that uses innovative vertical farming techniques and hydroponics to produce fish, salads and herbs for the local market.

Aquaponics might not be what most people think about when tucking into their leafy greens, but this method of farming is becoming increasingly popular and prevalent. GrowUp’s innovative approach to farming is a recirculating system that combines hydroponics and aquaculture. It’s almost fully carbon neutral and natural. 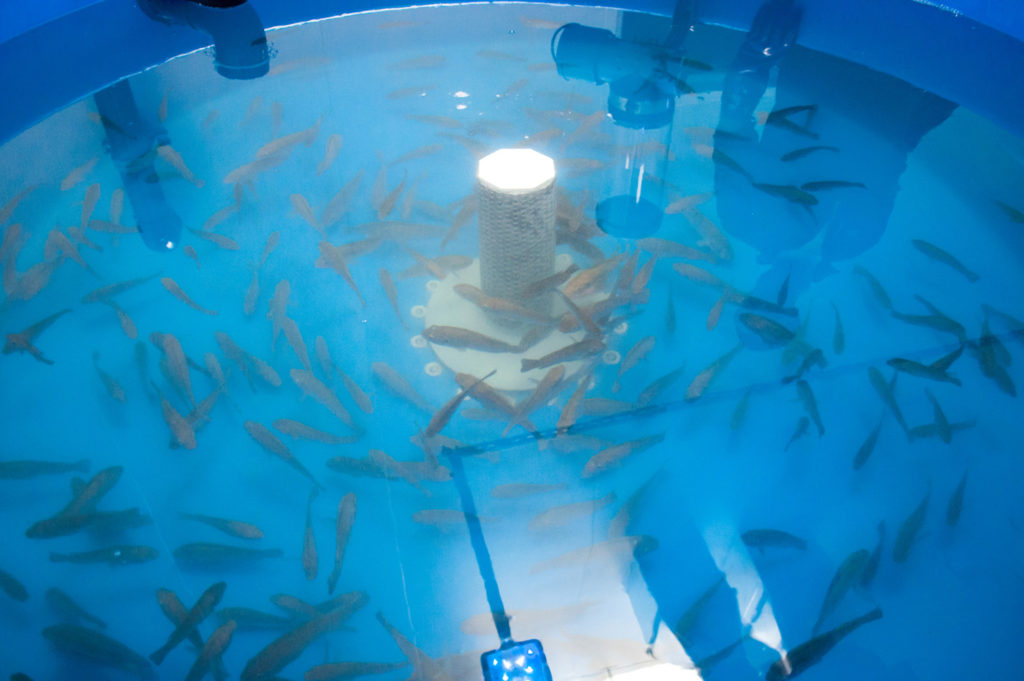 When the fish are fed, their waste is converted into fertiliser, with the help of microbacteria, to feed the plants. The plants then purify the water, which is then pumped back into the fish tanks. GrowUp believe that aquaponics can help find solutions to the problems of overfishing by producing a protein source that is accessible and versatile.

Unit 84 farm a species of fish called tilapia which were chosen for their need for a fairly low-protein diet. GrowUp produce around four tonnes of these fish each year and feel that this type of farming can go some way to help solving some of the global issues of fish farming. 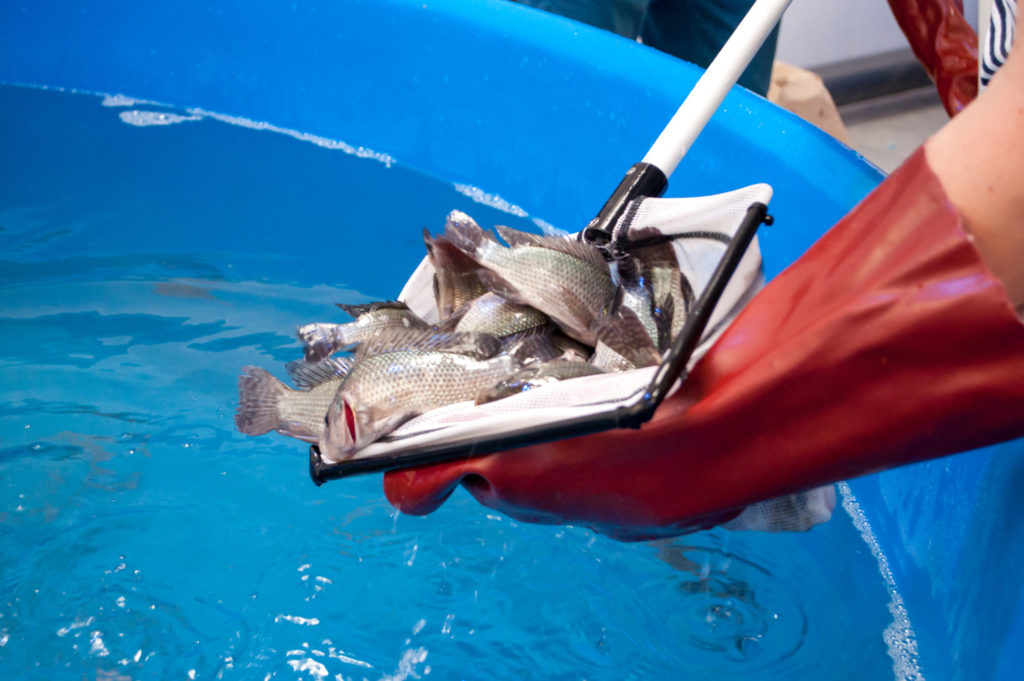 One of the biggest crimes in overfishing is the farming of smaller fish for fishmeal to feed more popular fish such as salmon. By producing a fish that has a fairly low protein diet, GrowUp can create a protein source for consumption that has much less strain on the ecology of our oceans.

In a similar vein, GrowUp are trying to tackle issues in the supply chain of fresh produce.

When you reach for a bag of “fresh” salad in a supermarket, it is likely to have been harvested up to 10 days earlier, then washed in chlorine and stored in a modified atmosphere inside its packaging in order to be deemed suitable for consumption.

GrowUp are tackling this head on; they acknowledge that the further salad travels the more the nutrition fades, so by farming in inner city London the salads they’re producing are fresher and taste better. To add to this, the continuing rhetoric surrounding food waste is felt most strongly in London and by producing close to the end consumer, GrowUp see the potential of farming in the inner city as a viable solution to part of the food waste problem. 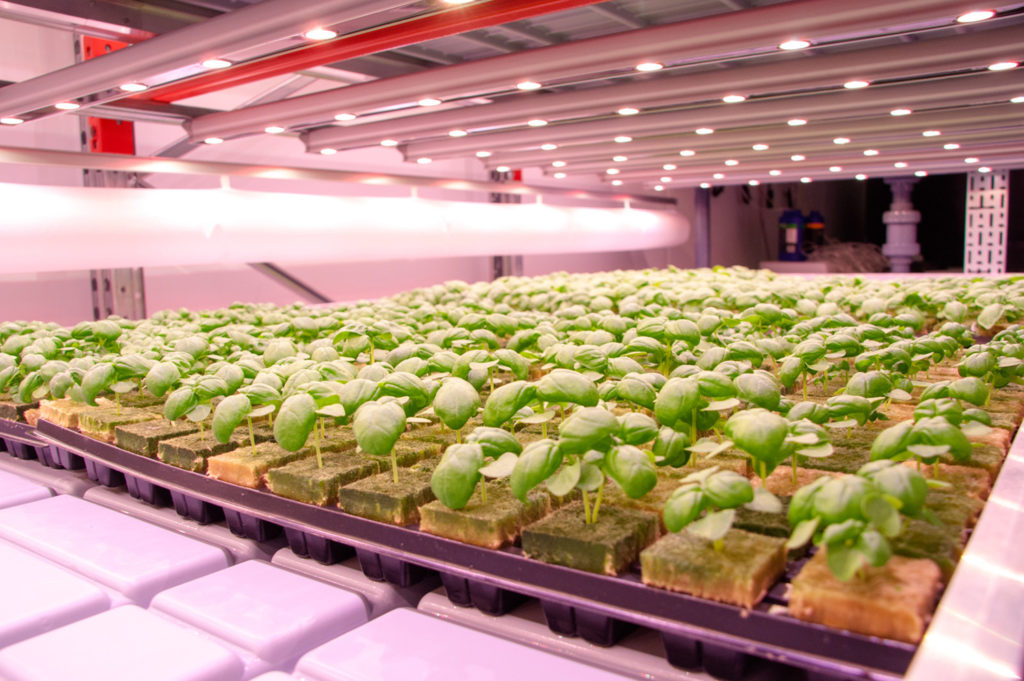 The hydroponic systems for producing the salads also benefits GrowUp’s energy costs as photosynthesis is manipulated to give the plants exactly what they need by using LED lighting. They only shine lights on plants that need it, so no energy is unnecessarily wasted. Similarly, as the salad is all grown indoors the weather doesn’t impact on the cost and speed of growing, so it costs the same to grow fresh greens in the middle of December as it does in August.

GrowUp acknowledge that in an age of globalisation people want to eat what they want all year round, so instead of changing the views and habits of consumers they aim to provide solutions such as the creation of sustainable fish sources and year-round salad leaves.

Engaging the Community Through Urban Farming

In addition to exploring innovative farming techniques, GrowUp are aiming to bridge the gap between consumer and producer and reconnect people with how their food is produced by physically closing the geographical gap. This philosophy is what GrowUp believes is going to enable people make more informed choices about the food they eat in the future.

One example of this is GrowUp Community Farms, a community interest company that run engagement courses with local schools and STEM groups, with the aim of encouraging small-scale aquaponics to be run by local communities.

At present, GrowUp sell their fish to a Thai chain restaurant and their salad is sold through various outlets, including restaurants, wholesalers and at a weekend market. However, the challenge is to reach those people who need it most and to achieve this GrowUp are looking to expand. Their plans for the future sound promising, extending Unit 84 to its full capacity and building a new farm, ten times the size of the Unit 84. GrowUp see this as the way to achieve more robust buying power from some of the bigger producers, especially through the economies of scale that will be achieved through larger purchasing orders of packaging and seeds.

In September 2016 the annual Urban Food Awards was held and in the London Leaves category, for growers that sell their own London-grown mixed salads, GrowUp won for their Supergreen Frilly Mixed Salad.

So, with awards under their belt, plans for expansion ahead and a customer base of some of the most coveted restaurants in London, it is no surprise that indoor vertical farms may have a bright future.

Could hyperlocal food, with metres rather than miles between farm and fork, be the future of food production? Discover what might be on your doorstep.

Mind the Gap: What is The Hunger Gap?
Rebecca Bingham
More Local & Seasonal

Mind the Gap: What is The Hunger Gap?

The UK hunger gap exists each year between January and May, when locally grown crops are sparse. How do we eat locally, responsibly and stay nourished?