Last year I signed up to Veganuary to kick off a new year’s resolution to stop eating factory farmed meat.

I won’t bang on about it too much, but there are a few reasons why you might want to look into where your meat comes from. From the horrifyingly cruel conditions animals are kept and transported in, to the British farmers being undercut by cheap production, to the mass overuse of antibiotics (which puts all our health in danger). Add to that the fact that food production is one of the biggest contributors toward climate change, and I found myself with quite a compelling argument.

I did not manage to stay vegan for the whole year after last year’s month long challenge. I have however, become mostly vegetarian, as well as developing a vague revulsion towards eggs. So, Veganuary 2018, surely this year will be easier?

Last year I prepped a little bit beforehand. I cleared my cupboards of non-vegan foods, earmarked some recipes and stockpiled a few vegan treats. 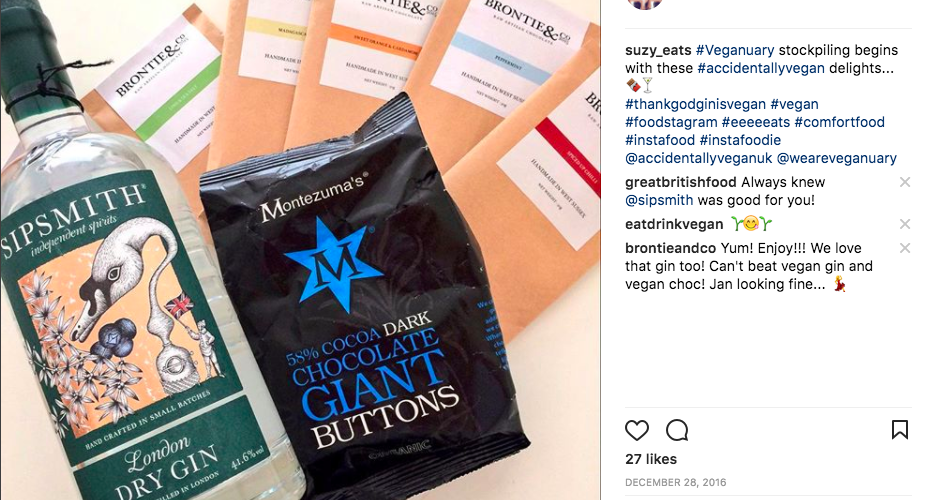 Plus I had the advantage of living in London with its amazing vegan food scene. I also live on top of a 24 hour superstore. Run out of chickpeas for homemade falafel? I’ll pop downstairs. Too hungover to eat anything but potato waffles? I didn’t even need to change out of my pyjamas.

As such, I was feeling pretty confident about Veganuary. That was, until I was out and about with friends on New Year’s Day. I was grumpy, tired and hungover. ‘Let’s go to Wahaca,’ someone said. Balls, I thought. I hadn’t really got my head around being vegan out of the house yet.

Scanning the menu, I debating whether to claim I was veggie with a dairy intolerance. Luckily a bolder and less hungover friend outed me to our server right away – who could not have been more helpful.

She recommended the vegan burrito (saying she ate it all the time, even though she’s not vegan) and even brought me some vegan chocolate sauce for the churros we ordered.

Wow. People in the real world (well, Brixton) not only tolerated vegans, but were actively kind and accommodating towards them?! This was a powerful revelation, and it helped give me confidence for the month ahead.

Of course, there were a couple of mishaps. Let me tell you a vegan horror story in two words. MILK POWDER.

Mistakes happen. If you’re going vegan, you can’t beat yourself up over them. Cutting out dairy can be a tricky step.

I even managed to be mostly vegan on the booze-front during last year’s Veganuary. I wholeheartedly recommend a website called Barnivore for any vegans who love a drink. It’s a pretty comprehensive list, or you can add your own submissions. (I added Sipsmith gin. You’re welcome.)

They raised a whopping £82,096 through crowdfunding to pay for ads in London, Manchester, Australia and the US. They’ve also got a host of celebrity ambassadors to spread the word. They include comedian Sara Pascoe, chef and writer Jack Monroe, and Harry Potter star Evanna Lynch. If you’re living in a city, chances are you’ll be seeing and hearing about Veganuary a fair bit.

Despite the odd setback, I really enjoyed being vegan for a month last year. I felt happy that I was personally doing something that benefited the planet and animals. It was a good way to pay more attention to what I eat and an excuse to be more creative when shopping and cooking.

This year I’ll be posting weekly to tell you my favourite and least favourite bits about going vegan, my top tips and total fails, and whether I think I can pull this off for good. Wish me luck!