Traditional farming methods have helped feed both humans and livestock for generations. But they’re not without their share of problems.

There’s no question, we need more food to sustain a growing population. Could underwater farming be the answer?

Traditional Farming Has Its Issues

There’s undoubtedly a lot of demand on the food industry. With a growing population and pressure on prices, farming in particular is a difficult industry to be in at present.

Nobody would argue against the fact that a growing global population needs more food to sustain itself. For years though, concerns have been raised about how farming practices are damaging the environment.

For example, deforestation is a huge issue. The agricultural industry is the main driver behind acre upon acre of felled forest. What’s more, the amount of arable land available is decreasing. This is even more troubling when you consider that a huge amount of land is needed to raise livestock.

Could Underwater Farming Be a Viable Alternative?

A unique alternative to traditional land-based farming is growing crops and herbs underwater.

Farming underwater isn’t new, given the world’s love of seafood. But being able to grow and harvest other foodstuffs from the oceans could take some of the strain off current agricultural practices.

One such experiment that highlights the potential of growing crops underwater is Nemo’s Garden. This is a research project from the Ocean Reef Group. Based off the coast of Noli in Italy, Nemo’s Garden is home to six plastic pods that are anchored to the seabed.

A variety of herbs and crops such as basil, lettuce and strawberries grow within these pods. Each air-filled pod uses hydroponic technology to grow foods without the use of soil. You can see the pods in action in this captivating video.

There are some real benefits to underwater farming. Growing crops in such an environment means no pesticides as no pests can enter the pods. It also conserves water use. The seawater in the pods evaporates then condenses back down to provide the plants with fresh water. An outside water source is only required when initially growing the plants.

It’s all well and good growing crops underwater. But do we want them? The long-term viability depends on scalability and consumer acceptance.

Thankfully, over the past few years, interest in sourcing local produce from the sea has been on the rise. Samphire, which grows naturally along the shorelines of the UK is one example. It’s a crispy, salty vegetable and has become popular on restaurant menus and in our kitchens.

Produce such as seaweed, sea beet, and sea kale are now also getting a look-in at restaurants. Seaweed is both sustainable and healthy. It tastes great and is a good source of iodine, especially important for vegans.

It seems that customers’ demands for sea-based foods and the potential for underwater farming are aligning. 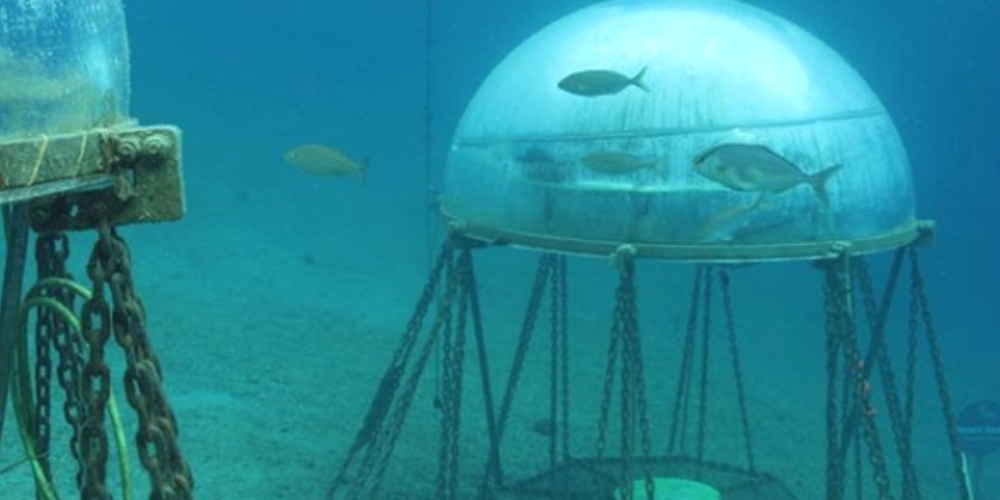 A Question of Viability

It’s certainly encouraging to see a growing interest in regional and locally grown foods. An appetite on the part of consumers to eat more produce sourced from the sea is fantastic.

It remains to be seen if underwater farming can support the food demands of a growing global population. Unfortunately, at the moment, it can’t. Nemo’s Garden is pioneering the way in which we perceive underwater agriculture, but large scale underwater farming has yet to emerge.

Although there’s always hope. The principles of underwater farming could become commercialised over the next few decades. But there are issues to overcome first. For example, trained scuba divers are needed to tend to the pods in Nemo’s Garden. This adds a large layer of expense and health and safety concerns. There’s also question marks over the scalability of underwater farming.

In the meantime, there are other steps we can take to minimise our own environmental footprint when it comes to what we eat. Reducing our consumption of meat and dairy has the biggest impact. Both need huge amounts of land to breed livestock and food production. We can aim to eat seasonally as much as we can. We can try growing our own vegetables and herbs.

Maybe someday soon an underwater salad will be mainstream. Until then, whatever your ways to reduce your impact on the environment, keep going!

What Is the Most Environmentally Friendly Meat?
Bethany Carter
Less Meat & Dairy

What Is the Most Environmentally Friendly Meat?

Meat production produces millions of tonnes of CO2 per year, but which is the most environmentally friendly meat, and how can you eat more of that?

Farming in Space To Advance Agriculture

Will farming in space provide the next phase in the future of agriculture? Find out about the fascinating developments in this field.

Sustainable Fish Farming, Is It Possible?

Overfishing, pollution and devastating fishing practices are all taking their toll on our oceans and fish stocks. Is sustainable fish farming possible?

FaceTime a Farmer – Teaching Kids the Power of Provenance

Could FaceTime a Farmer be the answer to teaching children about sustainable farming and making healthier food choices?