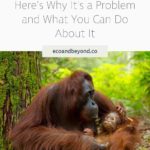 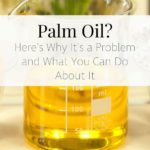 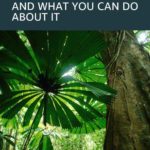 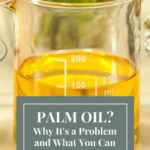 It’s usually crude oil and fossil fuels that cause a stir. More recently though, a different oil has worked its way into the public conscious. Palm oil – the ubiquitous ingredient in our food, beauty products and cleaning cupboards – is making headlines.

Perhaps it was Iceland’s Christmas advert that caught our attention. It features Rang-tan, a homeless baby orangutan, and has been banned from our screens for being ‘too political’. Whatever the trigger, it’s about time the problem with palm oil featured in the news, because it’s a global problem.

What Is Palm Oil?

Palm oil is a vegetable oil extracted from the palm fruit. It was originally used to oil the machinery that fuelled Britain’s Industrial Revolution. Now it’s used in soap, shampoo, cosmetics, cleaning products, baked goods, chocolate and even toothpaste.

Palm fruit trees are native to Western Africa but due to demand, they’re now grown all over the world. The majority of the world’s palm oil is harvested from Indonesia and Malaysia.

Over 60,000,000 tonnes are exported annually – that’s 30% of global vegetable oil production. It plays a huge part in the economic success of these nations.

Is Palm Oil Bad for Me?

Palm oil is a vegetable oil that contains nutrients such as vitamins A and E, but it also has lots of saturated fat. One tablespoon of palm oil contains 14 calories and 14g of fat.

Like all fats, it should be eaten in moderation.

Is Palm Oil Bad for the Environment?

This is where the problems lie. The demand for palm oil is destroying rainforests at a frightening rate. Greenpeace says that every 25 seconds, Indonesia cuts down a football pitch sized area of rainforest for palm oil plantation.

This is a problem for many reasons.

Rainforests Are the Lungs of the Earth

The amount of CO2 we produce is a real threat to the atmosphere. Our rainforests are known as the lungs of the earth because they soak up carbon dioxide and breathe out oxygen. Without rainforests, we wouldn’t have a healthy atmosphere. If they disappear completely, eventually we won’t have enough air to breathe.

Deforestation is making these vital rainforests smaller. As we burn our way through their ancient trees, we add to the air pollution problem. Indonesia is third on the world CO2 pollution scale.

Rainforests are home to endangered species. These species are endangered because their habitats are being destroyed to make way for palm oil plantations. A third of Indonesian species are critically endangered due to deforestation.

We lose around 25 Bornean orangutans a day due to deforestation. 90% of their habitat has been cut down over the last 20 years. We only have 60,000 of these beautiful creatures left, and counting.
Orangutans are not the only animals to face extinction through deforestation. Experts predict that Sumatran tigers will be gone within three years. The Sumatran rhino, sun bear, pygmy elephant, clouded leopard and proboscis monkey all face extinction too.

Deforestation not only removes vital habitats. It also creates a smaller area for poachers to search. Industry plantation roads make it easier for poachers to travel into the heart of the previously inaccessible rainforest.

Workers in Indonesia find themselves at the mercy of a major industry and a government that controls palm oil production.

With no other way to support their families, they have to become reliant on the palm oil process. The rainforest land they once relied on for food and shelter is disappearing, by their own hands.

How to Avoid Palm Oil

As consumers, we have huge power – to vote with our wallets. There are ways to help before the rainforests are flattened.

Check Labelling and Choose an Alternative

There are so many goods containing palm oil. You may be even find it in half of your household foods and products. I’m a vegan that only uses cruelty-free brands – and I still found palm oil in every room of my home.

I feel personally insulted that the animal and cruelty-free brands I trusted are quietly contributing to iconic species destruction and robbing us of oxygen.

A big problem is that palm oil isn’t always easy to detect, as it goes under many guises. It can be listed as:

The fact that it’s perfectly legal to label palm oil as vegetable oil, is surely criminal in itself. How are we supposed to know what this vegetable oil is? That aside, out of my household goods, the most frequent name that cropped up was ‘palmate’, mainly in my detergents.

Some brands are turning against palm oil completely. Iceland, for example, has promised to cut it from their own brand products by 2020. Unilever, Mars and Nestlé have promised the same in the past. But nothing has happened so far that slows the rate of palm oil deforestation.

Sustainably produced palm oil is an option and we can put pressure on companies to switch to such palm oil. It can be produced efficiently without cutting down the rainforests for space, but it’s not the norm yet. To make it happen, consumers need to turn up the heat.

Greenpeace is putting pressure on brands that use Wilmar for their palm oil. Wilmar is a giant of palm oil production and destruction and Greenpeace want to see it change its production methods. Wilmar supply brands like Oreo, Kit-Kat, Doritos, Dove soap, Colgate toothpaste, M&Ms and even Johnson’s baby lotion.

You can help by supporting their petition or even leaving a Tweet of your own. Here’s some examples:

@Nestle – When are you going to use sustainable palm oil?
@JohnsonsBaby – How do you feel about destroying the rainforests for palm oil
@Waitrose – Why does your cruelty-free hand wash still contain palm kernel oil?

There are alternatives to palm oil such as soya bean, rapeseed, coconut and jojoba oils. They’re not so common, but they will be if we buy those instead. Sustainably produced versions are important, otherwise we’ll trade one problem for another.

As consumers, we need to use our purchasing power. This can force change onto the palm oil producers that increase greenhouse gas emissions and drive biodiversity loss.

If we stopped consuming palm oil produced from rainforest clearance, it would have a huge effect. Companies only offer products that make them a profit. If that product uses sustainable palm oil rather than rainforest cleared palm oil – that’s what we’ll get.

It is possible to halt the destruction of rainforests for palm oil. Small changes to our shopping habits influence huge directional changes for global corporations. Switching our hand soap, shampoo or our brand of biscuits will help drive this change. Where will you start?

Awash With Kindness: Can I Buy Palm Oil Free Soap?

Looking to stay clean and keep our rainforests safe? Discover where you can buy palm oil free soap and learn what sustainable palm oil really is.

Palm oil makes its way into so many of the products we consume, including chocolate. But does palm oil free chocolate exist? We did some digging...

Save the Rainforests: Where to Find Palm Oil Free Shampoo

Palm oil is damaging our planet, yet it's hard to avoid. Find out where you can buy palm oil free shampoo and learn about sustainable palm oil production.

How we choose to spend our money on food has a direct impact on someone or someplace on the planet. Unsustainable practices will only carry on as long as we keep supporting them. Here are some of our favourite food brands doing good.

Help! I’d Like a Zero Waste Bathroom but I Don’t Know Where to Start!
Hannah de Gruchy
Less Packaging

Help! I’d Like a Zero Waste Bathroom but I Don’t Know Where to Start!

Reusable bottle, coffee cup and shopping bag? You might have those sorted. What about shampoo and toothpaste? Here's how you can have a zero waste bathroom.

From Bean to Bar: Reconnect With Ethical Chocolate

Learn the difference between mass produced chocolate and sustainable artisan ethical chocolate that is made with love and care.