Dining on a roast dinner with meat as a centrepiece used to be a weekly event. But over the past 50 years, the demand for meat products has skyrocketed.

Nowadays, eating lamb, beef, pork, chicken, seafood and processed meat is a daily occurrence for the average family. And farming practices have been forced to adapt to meet demand.

Is there such a thing as sustainable meat? And if so, what is the most environmentally friendly meat?

The need for animals to ‘fatten up’ quickly coupled with supermarket wars driving prices down puts farmers under pressure. Cramming animals inside and introducing unnatural feed to encourage growth are common practices.

But these farming practices are not sustainable and there is a significant environmental impact of eating meat.

At some point, we’re going to have to address the problems caused by the mass production of animal products and the toll it’s taking on our environment.

Why Animal Agriculture Is So Damaging to Our Environment

Over 900 million livestock animals are bred each year in the UK alone. This figure rises to 56 billion worldwide.

Raising this number of animals takes vast amounts of land and water at a time when both of these commodities are becoming scarce.

In turn, we see forests cut down and biodiversity shrink. And we’re seeing a growing number of indigenous communities forced out of their homes to make way for crop farming.

Meanwhile, world hunger continues to plague the planet. Yet over half the soya produced globally is used to feed animals which will end up in Western supermarkets.

Animal waste releases harmful gases such as methane which pollute our air, water and soil. And its thought that the farming of livestock is responsible for 14.5% of global greenhouse gases.

That’s more carbon emissions than all the cars in the world put together. Now that’s a thought to chew on whilst walking to work with a BLT sandwich in your bag.

Which Are the Most Sustainable Meats?

If you want to change your meat eating habits, so you’re consuming the most environmentally friendly meat, you need to understand the impact of different meats.

Let’s take a look at each meat in turn, starting with lamb, the least sustainable meat.

Based on figures from the Meat Eaters Guide to Climate Change and Health report, lamb has the highest carbon footprint.

Even before beginning its journey to our supermarkets, lamb produces an average of 20.44 kg of C02 emissions per kg of product.

Sheep are ruminant mammals, which means they release methane in their belches and waste. Methane is, per unit, the most harmful of greenhouse gases and even more damaging than carbon dioxide.

We should remember, however, that this figure doesn’t take into account the emissions produced post-farmgate, which includes transporting the product from the barn to your plate.

The environmental impact of this will vary widely depending on whether your lamb is homegrown or imported from New Zealand.

On average beef produces 5 kg fewer C02 emissions per kg than lamb but over three times more than pork.

Cattle farming uses billions of gallons of water and, like sheep, cows produce methane as a by-product.

Again, food miles need to be considered and the environmental impact will depend whether the beef is grown in the UK or imported.

Pork is a better option but that still doesn’t make your bacon butty eco-friendly. 4.62 kg of CO2 per kg comes from pig farming.

It’s carbon footprint rises as the meat is transported and turned into processed meat.

Waste, pesticides and other harmful chemicals leached from salmon farms pollute the sea.  These harmful pollutants go on to destroy habitats and kill other underwater life.

Salmon farms are also energy intensive and produce 4.14 kg of C02 per kg of salmon.

These birds do not produce methane and need less food and water than sheep and cows. If you want to minimise your carbon footprint without giving up meat, chicken is your best option.

Chicken produces 2.33 kg of C02 per kg of meat before transport and processing.

There are issues with slaughter and processing though. Slaughtering poultry is more energy intensive than slaughtering ruminant animals.

The manure produced from an intensive poultry farm also causes problems. It contains toxic heavy metals, pesticide residues and bacteria that can all enter local soil and waterways.

It’s also worth noting here that the stats on the sustainability of duck and goose aren’t readily available.

But these birds don’t escape the cramped conditions of factory farms. Not to mention the force feeding of some of them for foie gras.

Perhaps we need to change our palates and think about sustainability and meat in a different way?

What could be more sustainable than wild venison? Many areas of the UK have thriving populations of wild deer, all living in woodland with no pasture requirements.

There are also many areas where partridge and pheasant are initially farm reared and then released to the wild.

Companies such as The Wild Meat Company and Primal Meats source local wild meats, prepare them and deliver them to your door. They’re keen to take the “muck and mystery” out of preparing and eating wild game.

Could eating wild game meats be the answer to the most environmentally friendly meat question?

Could we switch to eating meat we’re not used to? If we all did, would that just transfer the problem?

Only time will tell but at the moment it’s worth considering wild game as an alternative meat.

What Can I Do to Ensure I’m Eating the Most Environmentally Friendly Meat?

Whichever meat you choose to consume there will be some negative environmental impact of eating meat.

But if you want to carry on eating meat, then you can help by eating less meat and choosing the most environmentally friendly meat when you do get your meat fix.

Leaving steak off the menu for just one day a week is equivalent to taking your car off the road for three months.

Another option is to source a sustainable meat or better still, leave red meats off your plate altogether. There are plenty of vegan alternatives hitting the market, so perhaps it’s time to experiment with some of these.

Finding Sustainable Meat in the UK

It can be difficult to find sustainable meat in the UK, especially if you’re looking in the supermarket. Not all supermarket meat is well labelled, and even if it is, some of the certifications can be a little vague.

If you aren’t willing to give up meat, then it’s best to opt for the most sustainable meat you can find that fits your budget. That might mean that you have to eat less meat, but that’s probably a good thing anyway. 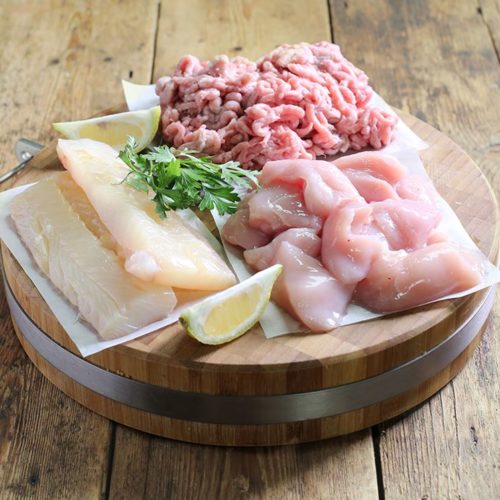 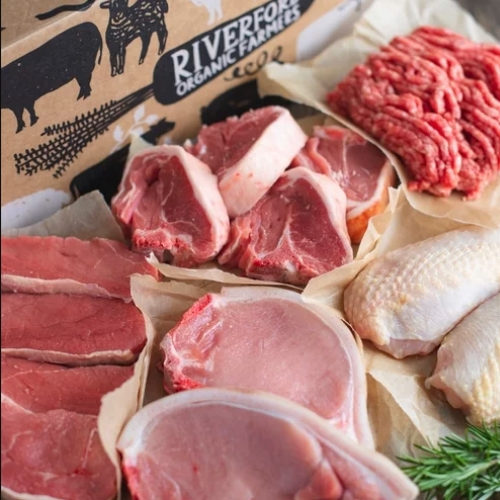 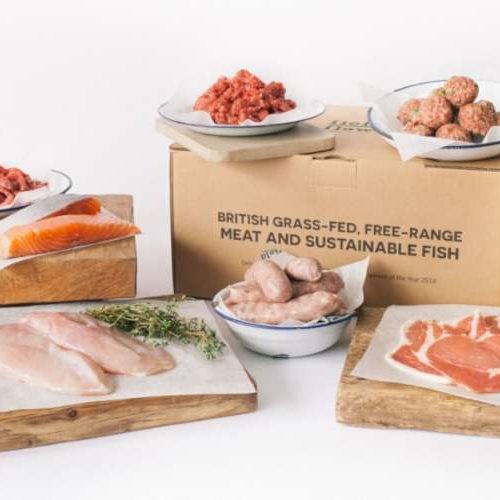 Enjoying Meat Without a Guilty Conscience

Plus, we’ve recently seen the release of the B12 burger, a plant-based burger that is uncannily like the real thing. And what’s more, it’s much less damaging to our environment.

With mock meats getting better and better, everyone benefits. What’s not to like about that?

Discover how to get ample protein when reducing your meat intake.

Eating less meat overall and choosing our meat carefully when we do eat it helps to protect our planet. So what is sustainable meat and where can we buy it?

Addicted to meat but concerned about the planet? Get locally sourced meat delivered to your door with our guide to the best organic meat delivery boxes.

Will In Vitro Meat Save Our Planet?
Kylie Ackers
Less Meat & Dairy

Will In Vitro Meat Save Our Planet?

Are we slowly eating our planet to death? Discover how in vitro meat could solve the world's meat sustainability issues.

How to Eat Less Meat – 5 Tips That Actually Work

Are you looking to eat less meat but don't know where to start? Here's five simple tips that you can use straight away to reduce the amount of meat you eat.

Meat Free Alternatives, Do They Stack up to the Real Thing?
Andrew Dedman
Less Meat & Dairy

Meat Free Alternatives, Do They Stack up to the Real Thing?

There are many meat free alternatives on the market, but are they comparable to the real thing? One family tries different types and gives their opinions.

Why Do Vegans Eat Fake Meat – What’s the Real Deal?

Why do vegans eat fake meat? Do they still dream of meat, and if so is 'fake' or vegan meat the answer? Do you love them? Join our debate!

Discover how to get ample protein when reducing your meat intake.