From quinoa to goji berries, the global market is finally wising up to nutritious ‘superfoods’ that traditional cultures have enjoyed for generations.

We’ve just caught wind of a new product that’s sure to take the health world by storm: blue corn pinole.

Food of the Gods

Indigenous Latin Americans have been drinking this blend of maize, spices, and other tasty tidbits as an energising beverage since the Aztec Empire. But it’s hard to get hold of outside of its place of origin — until now, that is.

If a promising Kickstarter campaign is successful, foodies around the world will soon be able to enjoy pinole in the form of delicious energy bars called Jubáami.

Jubáami is a new project straight out of the imagination of Oxford scholar and champion boxer Alexa Littaye. She discovered pinole while training for a boxing competition in Mexico. Soon after winning the competition, she founded the company Azure to bring her favourite fuel to the world.

Azure’s pinole is made of pure Mexican blue corn, a gluten-free heirloom crop rich in antioxidants and packed with 30% more protein than garden-variety hybrid maize.

To make Jubáami bars, Azure’s chefs mix this powerful product with wholesome ingredients like chia seeds, agave nectar, and dates — with no gluten or refined sugar. The result is a nutritionally dense, travel-ready snack that just happens to be totally tasty. 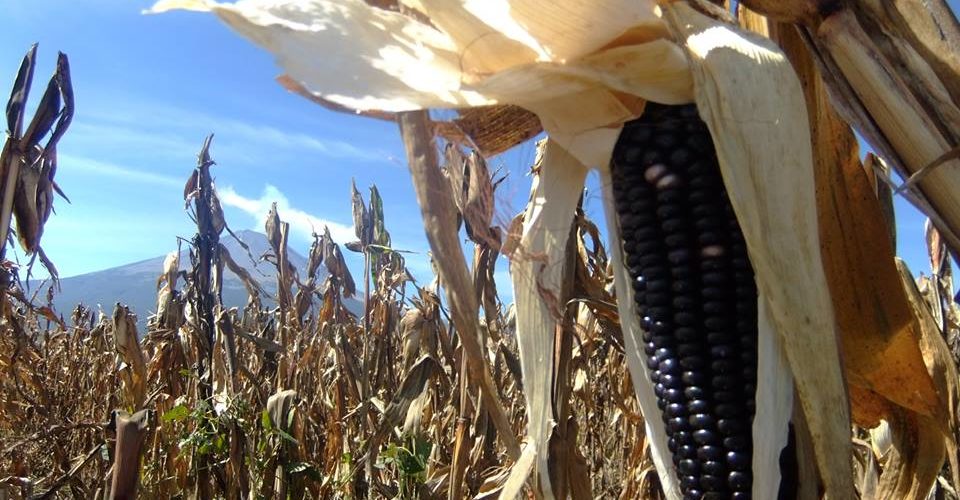 To ensure top quality and achieve their aim of “beyond fair trade”, Azure buys their maize directly from farmers. It’s all sourced in the village of San Mateo Ozolco. Here there’s an indigenous community nestled in the shadow of the active Popocatépetl volcano.

These farmers practise a sustainable intercropping system called milpa with thousands of years of history and tradition. Milpa fields are colourful patchworks of dozens of plants, from maize and beans to tomatoes and chilli peppers. These diverse crops work together to return crucial minerals to the soil. This means less fertiliser and pesticides are required compared to conventional farms. They’re also less prone to the devastating, famine-causing problem of land degradation.

Because Azure pays a fair price for blue corn, their partner farmers can continue to practise milpa. This is better than adopting more immediately profitable but less sustainable forms of farming — or seeking wage work in cities. As the company continues to grow, Azure hopes to go beyond mere fair trade. They want to become a force for good in their farmers’ communities.

Azure’s subscription-based direct sales model will allow them to keep profits that would otherwise go to middlemen. These profits can then be used to purchase manufacturing machines for the farmers. This reliable source of income will encourage people in San Mateo Ozolco to stay in their village and enrich their community, just as milpa enriches the soil.

Pick Up a Pinole

Here at Eco & Beyond, we’re all for a product that not only tastes great, but is making the world a little better, one bar at a time.

If you’d like to support Azure’s mission, you can donate to their project at Kickstarter. You’ll be one of the first to get your hands on next season’s stash of Aztec energy bars, merchandise and recipe booklets. You could even donate to create a brand new flavour of Jubáami bar!

This Kickstarter ends on 17 November, so don’t hang around.

20 Must Have Sustainability Apps for 2019
Kyra Hanson
More Sustainable

20 Must Have Sustainability Apps for 2019

The answer to a new eco friendly habit could be just a tap away. Here’s a comprehensive guide to the sustainability apps every eco warrior needs.

What Does Food Sustainability Really Mean?

Truth or Trend: Is Bamboo Sustainable?

Bamboo is a renewable eco-crop with multiple uses in textiles and hardwares. But when is bamboo sustainable and when does it damage the environment?

Can An Overfishing Simulation Teach People To Fish Sustainably?

Learn how an overfishing simulation tool at MIT is helping the world’s future business leaders understand why overfishing happens and how to solve it.

Learn how Greensand Ridge Distillery is making sustainable gin that benefits everyone involved, including its consumers. Gin lovers rejoice!