Meal planning can be complicated. Especially when someone in the family turns vegetarian. If that change is intended to be permanent, then mealtimes will change forever.

I bet when you saw the title you thought this was going to be about a teenager. One who has decided to become a vegetarian on a whim (possibly after seeing a disturbing meme on Facebook). And that this is the story of how my wife and I are struggling to keep up with their demands.

You’re pretty much spot on. Except it isn’t a teenager. One year ago, my wife and I decided to become vegetarians at the age of forty. We haven’t got teenage children, but an eight and a five year old.

For some months we’d been trying to buy ethically. We educated ourselves on the meanings of labels. We wanted to buy meat that was free range and as cruelty free as possible.

It proved difficult. The selection of free-range meat in supermarkets is terrible. It’s virtually non-existent in the case of pork, except for at Waitrose. We were struggling, and quite often ignoring the commitment we’d made.

Then a few things happened.

We saw a video online about what happens to male chicks. You may have wondered why we don’t see many roosters. What actually happens to them is shocking.

Then our young niece called to proudly tell us how she had dropped a live crab into boiling water.

Finally all four of us went down with food poisoning after eating leftover chicken from a barbeque. My wife was seriously ill for five weeks. During this period we tried to eat things that wouldn’t upset our stomachs. We ate very little fat and no meat at all.

We never went back.

We didn’t call ourselves vegetarian. To this day, it’s not a label we use. That’s due to the fact that we’ve never actually agreed that it’s permanent.

When we first stopped eating meat, we told ourselves that we’d take our time. We would figure out where we could source ethically produced meat on a regular basis. We soon found that not eating it at all was far easier.

Our two sons’ views differ spectacularly. The youngest is a bit too young to understand. He knows that mummy and daddy don’t eat any meat but is only just starting to grasp the concept.

“Daddy, this piece of chicken I’m eating is an actual dead chicken isn’t it?”

The older one couldn’t be more different. We’ve never told our children any horror stories, but we’ve always been completely honest about where meat comes from.

When our eight year old first found out that meat comes from dead animals he was a little bit shocked. A few months later he discovered that our meat doesn’t come from animals that died of old age, but animals that are killed. He was inconsolable.

He started to eat far less meat. For school dinners he would select the vegetarian option 90% of the time. The only exceptions were burger and lasagne day, his favourites at the time.

This was from the age of five, two years before we gave up meat. He was actually one of the main motivators for us to look for cruelty-free meat in the first place.

We’re big on food as a family and mealtimes are an occasion whether we’re at home or out. I work from home, so I’ve been cooking dinners from scratch for a long time.

This hasn’t changed. I still make a big effort and more often than not we eat something different every single day. The food we eat and how we source it has changed though.

Before we gave up meat we used to get a weekly veg box from Abel & Cole. After giving up meat we stopped. Sounds weird, I know. 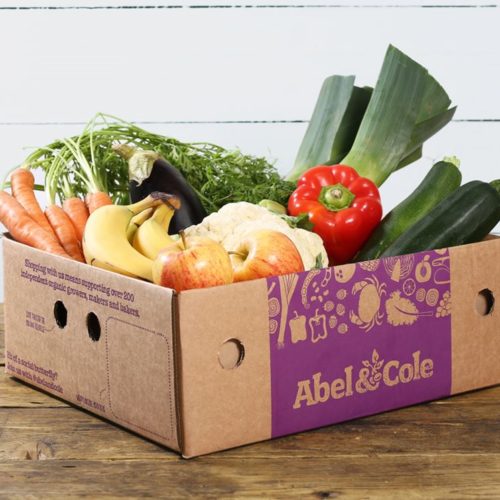 When meat was the ‘main ingredient’, it was easy to create meals using something from the box as a side. But when you’re using veg only, often there is no ‘main ingredient’. The veg box assortment was usually random and didn’t always go together to make a satisfying main. I was always having to add to it, so the random veg box became increasingly difficult to work with.

Pulses such as kidney beans, chickpeas and black beans are now a firm family favourite and make a great addition to almost any veggie meals, especially veggie chilli. If they could, both of my kids would eat a chilli 365 days a year!

Now I have endless apps, Facebook pages and lists of recipes on Evernote. There are some amazing people out there putting together some fantastic, fun recipes.

Bosh is a vegan Facebook page which is amazing. If you’re not a vegan then you can just swap out the almond milk and vegan cheeses for the real thing. Tasty is another great page with versions for veggies and kids. They also have a great app which non-vegetarians will love too.

I plan a meal, source the required ingredients and make dinner. The next day I can type in any leftover ingredients and find recipes to use them in and then add to them, and so on.

My youngest one doesn’t like Quorn, so if we’re having veggie burgers or sausages, I’ll give him a beef burger or pork sausages. This meat will always be free range. I won’t cook an entirely different meal, but I won’t give him something he hates. One rule in the house is that if I do serve meat for the kids, they aren’t allowed to leave any of it.

People sometimes ask what happens when the kids go to other people’s houses or to parties. The simple answer is nothing. The kids aren’t vegetarians, we are. They are as free to make their own choices now as they will be in the future.

Going out to dinner at a restaurant however is a lot less fun than it was. Many restaurants still only have one vegetarian choice for each course. The first time I went to a restaurant as a vegetarian, the only option was pasta – for both the starter and the main course. Not a great reflection on the chef!

While I’m here, a quick plea to restaurants: if you’re serving a vegetarian burger, make sure it’s not predominantly mashed potato. When served in a bun with chips, that’s an awful lot of bland carbohydrates.

Restaurants are gradually catching on though. We went to the OXO Tower for my birthday and they have a separate vegetarian menu available.

One less expensive place also stands out. Wetherspoon’s have a vegetarian menu which is just as large as their regular menu. It’s a great effort, but not somewhere I generally like taking the kids unfortunately!

I love the taste of meat. I don’t miss steaks or lamb chops, but I do miss the rubbish. Burgers, pork pies, sausage rolls and scotch eggs. I’m yet to find any tasty alternatives for these in the vegetarian world.

However, after a year I have finally reached the stage where I can’t forget that it is animal flesh. An animal has died to give me a five minute taste sensation. I guess I won’t be going back.

I am as fit, healthy and active as I was before. I haven’t lost any weight. (That’s most likely as my cheese intake dramatically increased as my meat intake went down.)

We’re still tweaking our purchasing habits. Personally I’ve always been loath to buy anything which says ‘organic’ on it, but I now buy organic milk from supermarkets, as the cows seem to be treated better. We‘re taking a closer look at the cheese we eat, and trying to avoid any which contain rennet.

Worst of all, I’m having to look at packets of jelly sweets to try and avoid gelatin. This is proving a challenge.

I don’t disagree with people eating meat. We have evolved as omnivores over thousands and thousands of years. Humans are animals, and animals eat other animals. That’s nature.

I just struggle with three things:

I hope this article has given you an idea of how easy it is to give up meat altogether. You might consider giving up meat for one or two days a week, or even just for one meal a day. Give it a go – it’ll make you feel good inside and out!

The Vegetarian Butcher is like no butcher you've ever seen. We go behind the scenes to find out if it is truly possible to butcher vegetables.

No Meat, No Problem! How to Get Protein as a Vegetarian
Becky Mathews
Less Meat & Dairy

No Meat, No Problem! How to Get Protein as a Vegetarian

Worried about how to get protein as a vegetarian? We've got all the advice and meal ideas you need! It's really not that difficult.

Jackfruit has risen in popularity recently. With a meat like consistency and the ability to absorb flavours, is tinned jackfruit all it's cracked up to be?

My Child Wants to Be a Vegetarian – What Now?
Gina Hagler
Less Meat & Dairy

My Child Wants to Be a Vegetarian – What Now?

What would you do if your child wants to be a vegetarian? One mum tells her story of putting vegetables ahead of meat at the dinner table.