Consider for a moment the journey of a slice of bread. Starting in a field of wheat, grains are harvested from the crop. They’re then taken to a mill and ground into flour before being baked into a familiar loaf. The final destination is likely to be a sandwich, a slice of toast or perhaps a bread and butter pudding.

How then is bread ending up as beer?

Our love for bread is undeniable, yet we waste 900,000 tonnes of bread every year. Around 24 million slices are wasted every day. That’s a LOT of bread.

Tristram Stuart, founder of the charity Feedback, set out to do something to ease this bread food waste issue with his brewing startup Toast Ale.

It was in 2008 that Tristram discovered that a single sandwich manufacturer was wasting 13,000 slices of bread every day. Not because the bread was bad or unsuitable for sandwiches.

But because their retail customer wanted the crust and the next slice removed from every loaf – to make all the sandwiches consistent and uniform in size.

This resulted in 17% of each loaf going to waste. That’s almost a fifth of all loaves wasted for cosmetic reasons.

Thanks to the food waste enthusiasts at Toast Ale, it’s no longer necessary for this edible bread to end up in the bin.

The team at Toast experimented with bread from small London bakeries to discover how it could be turned into another food product.

The result was Toast Ale, a deliciously malty pale ale. Toast Ale launched in London in January 2016, and all the profits from its sales go to Feedback. 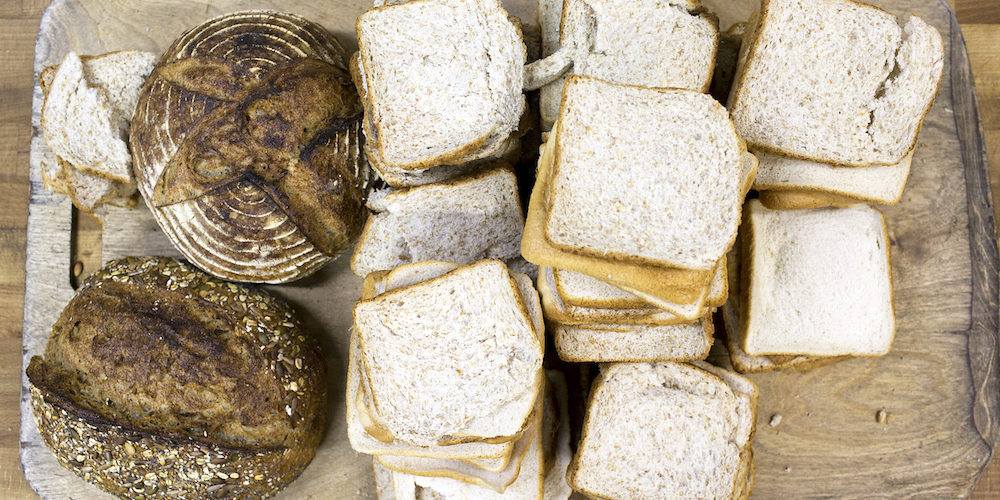 Toast now has an ongoing relationship with a large sandwich manufacturer. The bread that is usually discarded during the production of pre-packed sandwiches is reused to produce Toast Ale.

The venture has been so successful that they’ve outgrown their small corner of Hackney Brewery. They’ve now expanded to use the premises at Hambleton Ales and the Wold Top Brewery in Yorkshire.

The team at Toast Ale have achieved an amazing result in a short time and are very happy to have had the support of bakers in and around London.

“We’ve been approached by many bakeries across the country. Local independents to larger chains are looking to find a way of redistributing their leftovers rather than wasting it. Bakers really care about their product.”

“There is a lot of love that goes into baking and the last thing they want is for it to end up in landfill. Many larger companies have found ways to divert waste to be used as animal feed. This is far better than landfill, and also better than composting. But we’d all prefer to keep it in the human food chain. Or, even better, have no surplus at all!”

Toast Ale’s initial product was a pale ale in early 2016. Since then, the team have added a session IPA, a craft lager and a limited release special summer edition lager. The addition of the IPA and lager were helped by a crowdfunding campaign that raised nearly £28,000 in 28 days.

You’ll find Toast Ale at Waitrose, Tesco, a number of independents or online through the Toast website. 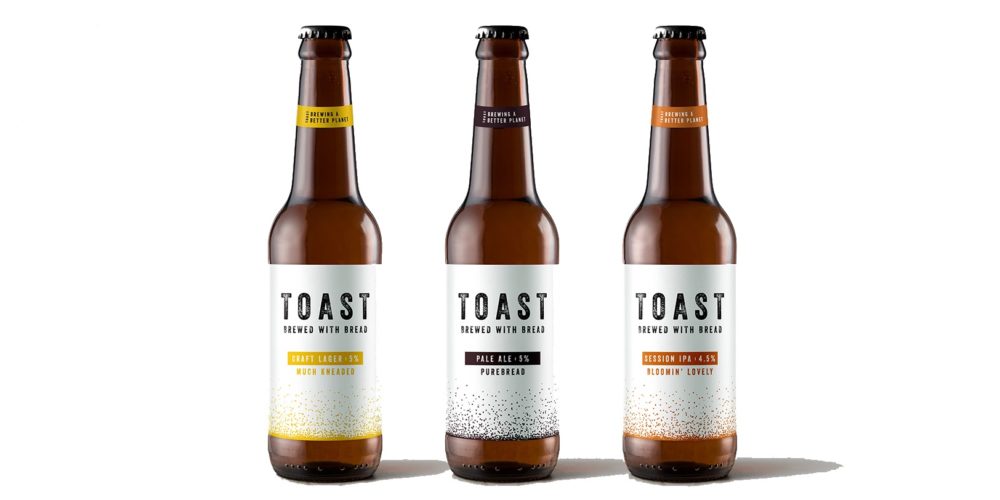 Toast also have a few collaborations with other breweries. These include Temple Brewhouse in London who’ve created an amazing ‘Brown Toast’ porter.

Not content to stop there (there is an enormous amount of bread waste waiting to be brewed, after all), Toast ran a successful crowdfunding campaign for a US launch. They’re now brewing an American Pale Ale in New York.

Their next stops were South Africa and Iceland and they’ve set their sites on being in over 30 countries by 2020.

Not only that, Toast have recently been certified as a B Corp. They’re the first UK beer company to be awarded this prestigious certification. This means they’re committed to using sustainability to redefine what it means to be a successful business.

When it comes to food waste, it’s so often thrown in the bin with all the other rubbish. If you have a garden maybe you’d add food scraps to the compost heap. Or, you might have a local authority that collects food waste.

But even if when composting, we’re still throwing away a lot of food that could’ve been eaten. Usually because we buy too much or because of over-cautious sell-by dates.

As the popular song by Jack Johnson encourages, it’s better to reduce, reuse and then recycle. While it’s a catchy tune, it takes more than a few clever lyrics to change the behaviours and habits of people and businesses around the world.

With that in mind, Tristram, in collaboration with the Feeding the 5000 campaign group, designed the food waste hierarchy. This is a guide on handling food before it becomes waste: 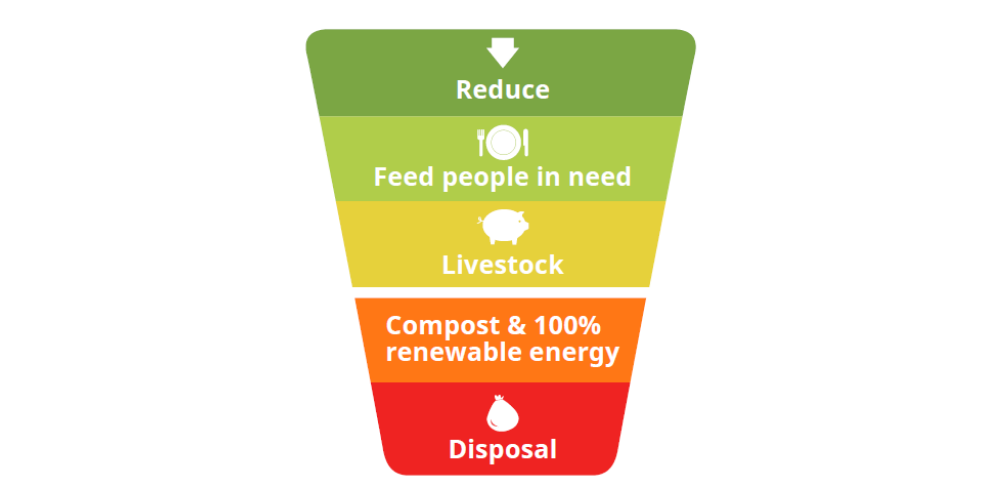 It provides a “logical and environmentally sustainable order of priority for the management of food”.

From the top down the hierarchy displays five steps for food waste. Outcomes are listed in descending order of preference according to environmental impact.

The hierarchy demonstrates the lifelong habits we’ve all acquired in disposing of edible food. By thinking about how much food we actually need we can reduce the amount of food wasted.

Then we can put our excess food to better use by feeding those in need or reusing the food for alternative uses. 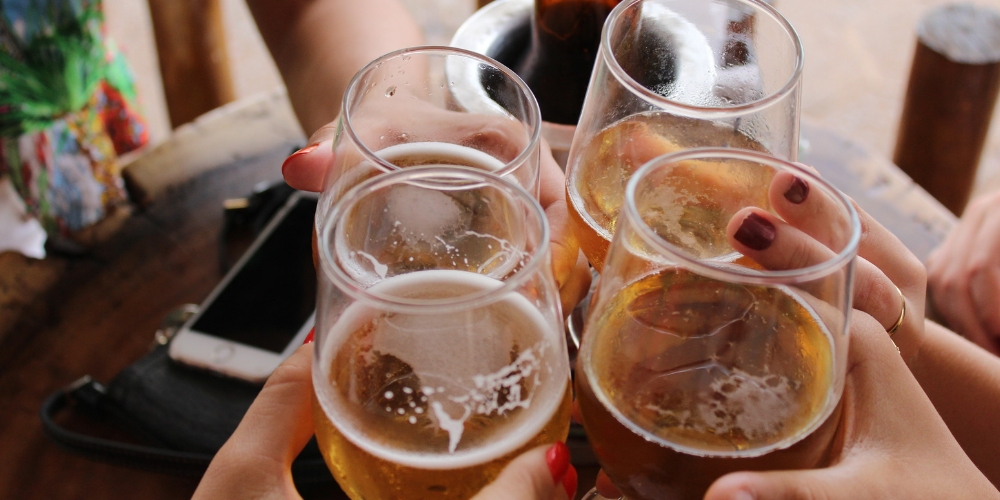 Make Your Own Beer From Bread Waste

The amount of bread wasted in homes and businesses around the world is staggering. Given the scale of the problem, Toast Ale are working on plans to expand their operations even further. They also plan to help bakeries and breweries connect nationwide to brew Toast themselves.

Toast are so committed to this initiative they have made their Toast Ale recipe public. They even encourage homebrewers to use their own leftover bread at home to brew up a batch of Toast.

Or, if you love bread so much that you never waste any at home (excellent news), reach out to your local bakery or cafe. They’re bound to be able to help you out with enough so you can brew up a batch of your own.

And if you thought using bread waste to brew beer was clever, there’s more. How about using the by-products of the brewing process to make granola bars? Talk about a circular economy.

They make a perfect snack accompaniment to Toast Ale too. So get stuck in!