What is the best vegan cheese on the market? We set out to find the answer!

Are you vegan or plant-based and struggling to find a decent cheese alternative? I hear you.

I could add all the oat / cashew / almond milks in the world to my coffee and like them all. But finding a decent vegan cheese? Much harder.

Like many following a plant-based diet, this is my biggest challenge. I love cheese. After all, there’s no better pairing than a strong Stilton and a glass of red, is there?

And so far, I haven’t managed to get a decent tingle in the roof of my mouth from a ‘strong’ vegan cheddar. Nor have I found a satisfyingly salty-yet-creamy vegan feta. Let alone that elusive pungent plant-based blue.

But with vegan cheeses hitting the market at a dizzying rate, could ‘The One’ be out there? Will my fabulous seaside-themed cheese board come out of retirement? Could vegan cheese actually change my life?

For the greater good, I decided to find out and checked out some of the best vegan cheese on the market.

Because where else would a cheese review start, than with the good ol’ cheese sandwich? I tried Tesco’s Free From Mature Cheddar and the Violife Original Flavour Block. 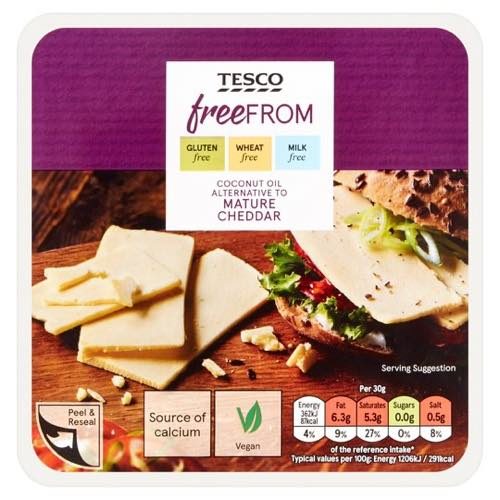 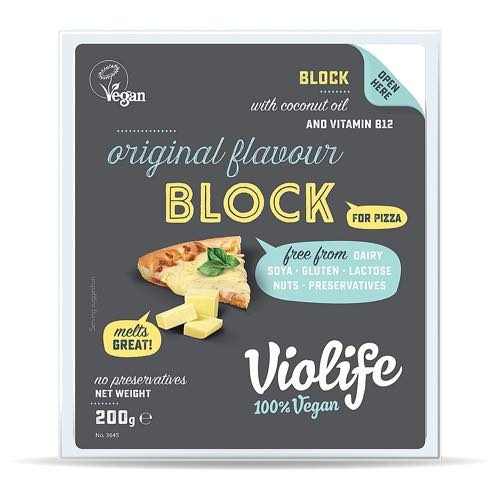 I’ll get straight down to business. I liked nothing about the Tesco vegan cheddar. It smelt awful, tasted worse and it felt like I was eating a butter sandwich. I thought I’d try grating it to sprinkle on pasta.

But grated butter on pasta isn’t good. To be fair, it melts well, but once melted, I couldn’t get it, or the taste, off my teeth.

The Violife version was better. It’s a bit difficult to grate as it quickly goes quite soft in your hands. (But as a consequence, melts satisfyingly on toast under the grill.) In a sandwich with tomatoes and Branston, its great.

Not roof-of-mouth-tinglingly great, but as a mild cheddar, it does the job. Alone on crackers, it’s a little insipid for my eager taste buds. Definitely not the best vegan cheese!

Since pizzas are all about the melted cheese, I put two vegan mozzarella’s head to head with the grill: Ocado’s Free From Mozzarella Style Slices and the MozzaRisella version. 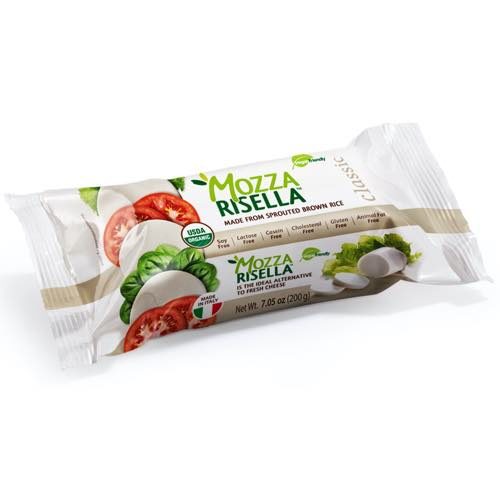 Ocado’s flat, square slices of mozzarella didn’t make me feel like an Italian pizza chef. But it melted well and although it stuck to my teeth, the texture wasn’t bad.

I was disappointed with its lack of stringiness and slightly buttery taste though.

MozzaRisella was the shape(ish) and texture of ‘real’ mozzarella. It’s rice-based and is the cheese Pizza Express and Zizzi’s use on their vegan pizzas. It’s stringier, and so feels more authentic, and melts really well.

It doesn’t have too much flavour, but then real mozzarella doesn’t either. I couldn’t imagine eating either without something tomato-y. I was just happy it didn’t taste like butter.

Getting Fancy with Free-From Feta

One of the dishes I miss since my life has been mostly without cheese, is one with artichokes and feta.

So I tried it with the Violife Mediterranean Style Block. And was pleasantly surprised! 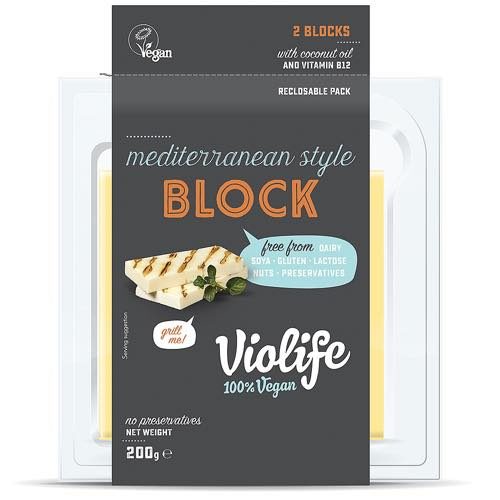 It’s salty enough and although the mouthfeel isn’t as crumbly as feta, the taste is really quite good.

Is There Such a Thing as an Authentic Vegan Cheese Sauce?

This experiment had to include a cauliflower cheese, so I made two cheese sauces. One with Sainsbury’s Deliciously Free From Soft Cheese and one with Vegusto Vegan “No Moo” Piquant Cheese (no longer available in the UK).

The Sainsbury’s cream cheese fared well. As expected, a cheese sauce made with a cream cheese doesn’t pack much punch, but it was creamy and importantly, didn’t taste buttery.

On (accidentally vegan) Warburtons Crumpets, this cream cheese is really good, too.

Because the Vegusto version had the word “piquant” in its name, I was most excited about this cheese. I was also the most disappointed. Although the packaging is ambiguous, this best resembles a parmesan.

It was certainly strong, aromatic and salty. But there was something about the flavour that I just couldn’t put my finger on. The ingredients list includes ‘spices’ so it could be one I can’t think of that I don’t like.

It melted into a cheese sauce well, but even a large dollop of mustard couldn’t disguise whatever it was about this cheese I didn’t like.

I tried it on everything. In a sandwich, on toast, on crackers, as a pasta topping. But disappointingly, I just couldn’t make myself like it.

And Finally, the All Important Vegan Stilton

Finding myself home alone one evening, I did what any self-respecting foodie would do, and had cheese and crackers for dinner.

I had reserved this night for the priciest cheese in this review, From Nature UK’s Cashew Stilton. At £7 plus P&P, I had high hopes.

I had it with the strongest salt ‘n’ vinegar crisps I could find (Tyrells), a heavy red wine and a few silverskin onions. (I do love strong umami flavours.)

Did I love this blue? Love is perhaps too strong, but I did really like it. The texture and appearance are perfect. The flavour could do with being a little stronger, but I think that’s my eager taste buds again.

From Nature UK age this cheese for seven weeks, using a similar bacteria to that used in roquefort. This is definitely an artisan product.

Frustratingly, I’m still on the hunt for something I could call the best vegan cheese! I want a really good vegan cheese that I’d be happy to see on my cheese board.

Unlike meat alternatives, I won’t be raving about any to my dairy eating friends or family.

All the vegan cheeses I tried are easily available from supermarkets or online. The Vegan Kind have just started offering Daiya vegan cheeses, which I’ve heard good things about.

Ever the experimenter, I’ll be trying these soon. Plus, as my quest continues, I might even have a go at making my own!

From supermarket own brand plant-based cheese selections to high street restaurants offering vegan pizzas, dairy-free choices are definitely going mainstream. (Although I’m yet to be offered a sprinkle of vegan parmesan.)

So I’m hopeful that by this Christmas, or maybe Christmas 2019, I’ll be sharing an amazing cheesy experience with my family, and not feel like I’m missing out.

In the meantime, if you’ve found the Holy Grail of vegan cheese, shout now!

Editor’s Note: during 2019 we discovered Kinda Co – so far this is the best vegan cheese we’ve found. Unfortunately they’re still a small brand, but if you can get your hands on some, go for it!